Hanging a picture on a wall is arguably the simplest of all DIY home-improvement projects. However..you’d be incredibly surprised how often people use the wrong hardware. Many people just take a nail and nail it into the wall, thinking its sufficient, not factoring in what type of wall it is being hung to, or the weight of the picture.

As with most things, there’s a right and a wrong way to hang pictures. The most common problems include hanging the picture securely so it doesn’t fall, pinpointing the nail location so the picture hangs exactly where you want it, and hanging it perfectly level. There’s no single, surefire way to hang every picture..but here are some tips that can help you be sure the painting is secure and perfectly straight, almost every time!

When hanging a picture, it’s best to drive the nail into a wall stud for superior strength. But chances are you’re not going to. Studs are typically spaced 16″ on the center, so realize that the chance that a stud will be in the

same place where you want to hang your picture is unfortunately small. You are much more likely to tap the nail into a void between two studs. With small or medium sized pictures, that is going to be fine. If you’re hanging a huge mirror or a flatscreen television, it is not fine, and could end up in disaster.

A single regular nail will support most pictures, even when nailing between studs. The trick is to drive the nail into the wall at a steep angle, at 45 degrees. That will provide much greater holding power than tapping the nail straight into the wall.

Another option is to use a picture-hanging hook, which comes with its own small-diameter nail. These specialty fasteners come in a wide variety of sizes and are surprisingly strong; if properly installed. First, insert the nail through the sleeve on the hook, then hold the hook against the wall at the desired height, then tap the nail in with the hammer. Be very careful, though, not to strike the hook, or it’ll cut into the wall. 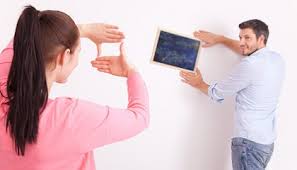 Generally screws provide more holding power than nails, so they’re better for hanging large, heavy pictures. When hanging a picture between studs, use a hollow-wall anchor, such as a toggle bolt, molly bolt, or spiral anchor. A spiral anchor is the easiest to install: Simply drive it into the wall with a screwdriver, then drive a screw into the anchor. Some spiral anchors come with special picture-hanging hooks.

We’ve been there: You’re staring at the wall, trying to figure out where to you need to drive your nails so your pictures hang in just the right, pleasing spot. Here are two quick, effective methods for figuring it out.

One way you can do it, is to hold the picture against the wall at the desired height, then draw a short pencil line on the well that marks the top of where the picture will go. You don’t have to draw all the way across the top of the picture; just make a short line at the center.

Take down the picture; hook a measuring tape onto the hanging wire attached to the back of the frame (or whatever will be sitting on the nail to hold up the picture). Pull the wire tight and measure the distance to the top edge of the frame. Now simply measure down from the pencil line on the wall that same distance, mark th 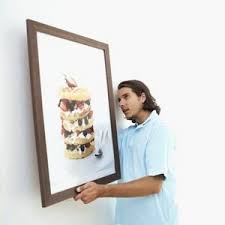 e spot, and drive in the nail. If you’re using a picture-hanging hook, make sure the hook—not the nail—is level with the spot you marked.

Another way you can hang it is to make a simple picture-hanging tool from a wire. You can purchase wire at any Wal-Mart or home improvement store. The goal is to create a handle.  You’ll attach the wire to both sides of the frame.

Sure, you know how to use a level to get straight pictures. But if you pictures don’t stay level, try this simple trick. Visit a home improvement store and purchase a package of small rubber bumpers, the kind with peel-and-stick adhesive backing. Take the offending picture and place it facedown on a covered surface. Stick one bumper onto each bottom, rear corner of the frame, then rehang the picture.

The rubber bumpers will provide a little traction and help hold the picture straight and level. And as a bonus, the bumpers create airspace behind the picture, which prevents dust and dirt from collecting and creating “shadows” on the wall. Of course, the best way to make sure a painting is even is to use a leveler. These can also be purchased at any home improvement store.

Get Your Fast Cash Offer Today!